The myth of the sustainable city

​by John W. Day and Charles Hall
Cities are touted as efficient living areas compared with suburban and rural areas. Why are cities considered as the solution to many of the problems that we face in this century? The efficiency of mass transit, bicycles, and walking, shorter commutes, and smaller more efficient living spaces are reasons often cited. David Owen, in a well-quoted article in The New Yorker, wrote that “the average Manhattanite consumes petrol at a rate the country as a whole hasn’t matched since the 1920s.” Owen goes on to state that “eighty-two percent of Manhattan residents travel to work by public transit, by bicycle or on foot” or “ten times the rate for Americans in general.” But in the greater New York City area, 56% of residents drive to work. According to this same study, New York City has the longest commute time at 35 min and the fifth highest congestion score of the ten cities in the U.S. with the worst traffic. Elizabeth Farrelly writes in Blubberland that density is the key to sustainability. “If we were to design a green settlement-pattern from scratch, it would not be suburbia, or urban villages, or Greek fishing towns, or even say, Barcelona. It would be Manhattan. Manhattan – or something like it – is the greenest city on earth.” Is Manhattan really that green? We will come back to the concept of green later, but one point is clear. There will need to be fishing towns in Greece and many other places if the millions inhabiting Manhattan want to continue to eat fish!
In the spirit of the efficient and green city, in 2011, Scientific American magazine devoted an entire issue to the idea that cities are the future for mankind. It featured a two-page spread entitled The Efficient City. The picture is of a thoroughly modern high-density city with gleaming multistory buildings interspersed with (relatively small) green spaces and clean streets with little traffic. This city apparently doesn’t have poor people as there is nothing that looks like a low-rent district. Included in the example are a number of “creative solutions to reduce energy consumption, water use, waste and emissions.” Some of the features are solar power (photovoltaic, hot water heaters, and solar films), high efficiency windows, carbon sequestering concrete, green roofs, vertical farms (no need to depend on ecosystem services for this agriculture; we will come back to the idea of urban farming in a later chapter on food), hybrid taxis, underground and smart parking, irrigation systems controlled by satellites, sewage sludge incineration, efficient appliances, and storm-surge gates to protect low-lying parts of the city (especially important for New York and New Orleans, two cities featured in the next chapter). Some of these solutions, such as solar power, high efficiency windows, and efficient appliances, could be used for suburbs and even rural areas, but high-density living likely does foster lower direct energy use for transit and heating and cooling. However, almost all gasoline consumed in the U.S. is consumed in metropolitan areas (in the broader sense) because this is where most people live (see map below). In addition, there are large indirect energy and material demands that are not often accounted for in calculations of urban energy use. An example is all the energy and materials it takes to get gasoline to an urban consumer, whether for a car or bus, (searching for and drilling wells, pumping the oil to a refinery that converts the oil to gasoline, and transporting the gas to a network of gas stations) and, in fact, almost everything from building materials to artificial lighting to clothing to food that is used in a city is produced elsewhere, often at high energy costs. The same issues are at play on a global scale. When economists claim that the US economy as a whole has become less energy intense (defined as energy used per unit of gross domestic product or GDP), part of what they are really saying is that energy-intensive and highly polluting industries such as aluminum- and steel-making have been outsourced to regions and countries where labor is cheaper and environmental regulations are less stringent. However, our need to consume these imported products, often shipped over long distances, only increases, and particularly in densely populated urban areas with the sophisticated infrastructure of “The Efficient City.”

The red and orange areas on the map  below showing high gasoline use would overlay well on a map of the “megaregions” in the U.S. where the majority of the population is located, showing that heavily populated areas burn more fuel. Any proposals to reduce gasoline use need to focus on metropolitan areas. Manhattan may have a high use of public transit, but what about the whole 21 million strong metro area in New York and northern New Jersey? 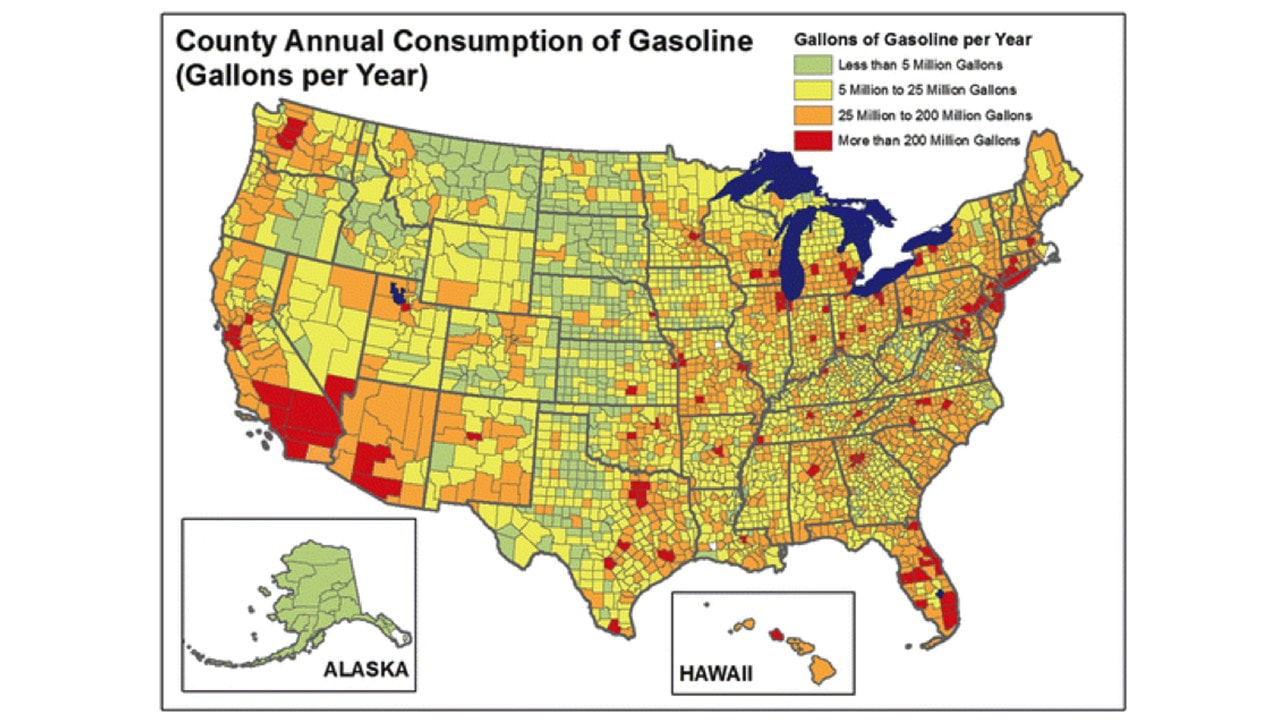 Let’s come back to greenhouse gas emissions. The U.S. Energy Information Agency produced an inventory of direct carbon dioxide emissions by state from 2000 to 2010. The information in this report is illuminating. If we look at energy-related per capita carbon dioxide emissions by state in 2010 there are some striking differences. At one end of the spectrum are states with high CO2 emissions per person. Kentucky, Montana, Louisiana, West Virginia, Alaska, and North Dakota all have emissions of more than 35 metric tons of CO2 per person with Wyoming being the highest at 118 tons per person. At the other end are states with less than 15 tons per person. These include almost all of the northeast states as well as California, Idaho, Oregon, Washington, and Florida. New York is last among the states at 8.8 tons per person. Only the District of Columbia is lower at 5.4 tons per person.

Are there lessons that the folks in states like Louisiana, North Dakota, and Kentucky can learn from people in New York, Rhode Island, and Vermont about lowering their emissions and being more efficient? Yes and no.

Lower emissions are not necessarily due to the fact that people in New York State, Vermont, or Massachusetts drive less or have smaller houses. And it’s not necessarily because the average West Virginian, Louisianan, or Montanan personally uses huge quantities of energy or drives long distances that they have such high per capita total emissions. At least partially, it has to do with the nature of the economy in the different states and the particular area (central city versus suburbs) that is being considered.
Let’s compare two states at different ends of the emissions spectrum, New York and Louisiana. On average, New York annually produces about 10 metric tons of CO2 per capita compared to about 50 tons per year for Louisiana. But here’s the most important difference in energy use between the two states: the industrial sector. Each year, the industrial sector in Louisiana produces 128 million metric tons of CO2, compared to 9.1 million tons in New York. Texas is even higher with 211 million tons. This is because Texas and Louisiana have the highest concentration of refining and petrochemical industries in the nation.
​But here’s the key point. Very little of the energy and industrial products produced in Louisiana, Texas, and North Dakota and similar states are used personally by the citizens of these states. In addition to refining and petrochemical industries, Texas and Louisiana are major producers of oil and natural gas. Montana, Kentucky, and West Virginia produce a lot of coal. And Alaska and North Dakota produce large quantities of petroleum. All of these energy-intensive and polluting industries exist to meet demand for their products all over the country, but particularly in urban population centers since this is where most people live. This demand involves both direct and indirect uses, including fertilizers on the farm for high-yield agriculture that is needed to feed these urban populations. So, to be fair, most of the industrial CO2 emissions should be removed from the balance sheets of Texas and Louisiana and other “energy” states (where citizens use relatively little of what is produced) and added to the emissions of the states that are end users, directly or indirectly, of the products of energy production and industrial activity.
Excerpted from America’s Most Sustainable Cities and Regions: Surviving the 21st-Century Megatrends, by John W. Day and Charles Hall (with contributions from Eric Roy, Matt Moerschbaecher, Chris D’Elia, David Pimentel and Alejandro Yáñez). With permission of the publisher, Copernicus Books, a Springer imprint.