GM’s Electric Future Means ...
​
Prosperity for One Michigan Town, Disaster for Another

​by Bryan Gruley and David Welch
The mood was gloomier the next day at a public library in Hamtramck, an urban enclave within Detroit that has a GM plant of its own. About 50 locals sat in hard-backed chairs to discuss a GM plan that threatened to shut down the facility next January, killing 1,500 jobs. “General Motors should be listening,” Karen Majewski, Hamtramck’s mayor since 2006, told the audience. Someone asked if anyone from GM was present. There was no reply.

​Starting in 1981, more than 1,000 homes, 16 churches, and dozens of businesses were demolished to make room for the factory, known locally as Poletown after the surrounding area’s ethnic roots. The attendees at the March meeting rose one by one to express their bewilderment and anger that GM would now have the gall to shut it down. “It’d be a damn shame upon another damn shame,” said Democratic State Representative Isaac Robinson. Along with the jobs, Hamtramck stands to lose more than $800,000 in annual property and income taxes, 4.5% of the town budget.

Every decade or so, GM undergoes a transformation to ensure the company’s long-term survival. Invariably, these makeovers turn some communities into winners and others into losers. Hamtramck was one of five North American factories targeted last November for possible closing as GM accelerates a shift aimed at producing 20 electric vehicle lines—one or two of them potentially driverless—by 2023. The plant in Orion Township was first spared, then presented with money and jobs.
But as the twin tales of Orion and Hamtramck show, the decisions also reflect history, politics, labor contracts, and geography. And all these factors, especially the raw numbers, are subject to continual evaluation. Poletown and Orion both produce money-losing cars. If the electric- and driverless-car revolution doesn’t play out the way GM expects, Orion, too, could face a reckoning.

The company’s choices could influence the 2020 election, especially in Michigan, where President Trump won by only 10,704 votes after promising that no Michigan auto plants would close on his watch. (So far, a GM transmission plant in suburban Detroit has.) Hamtramck has more immediate concerns. The Poletown plant was among the topics of negotiations in the United Automobile Workers strike. It appears that the facility may survive to build electric trucks and SUVs, but production could be a year or more away, and employment would depend on how quickly consumers embrace electric trucks. Regardless, Majewski says, “there’s a sense of betrayal.”
Every decade or so, GM undergoes a transformation to ensure the company’s long-term survival.
Invariably, these makeovers turn some communities into winners and others into losers.
With a population of about 22,000 inside its 2.1 square miles, Hamtramck is one of the densest and most ethnically diverse communities in Michigan, with Bangladeshis, Iraqis, Mexicans, Ukrainians, and Yemenis living alongside the Poles and African-Americans who once dominated the populace. A crosshatch of streets lined with century-old brick and clapboard homes surrounds downtown, the heart of which is about a half-mile along Joseph Campau. Between a smattering of pawnshops and vacant storefronts are grocers selling halal meat, Polish sausage, and Bengali spices. The steeple of St. Florian Roman Catholic Church towers over an area teeming with other churches, a Zen Buddhist center, mosques, and the Islamic Center of Hamtramck. Retail marquees dating from the mid-20th century mix with Arabic signs and hipster lures like the blood-red shark’s head outside the High Dive bar.

The city has long struggled economically. Twice in the past 15 years oversight of its finances has been transferred to a state emergency manager. The city’s median household income is $24,369, and about half the residents live in poverty, according to the U.S. Census Bureau. Relatively low property values—the median value of a home is $53,900—have attracted millennials who want a place with a walkable, urban feel but can’t afford downtown Detroit’s gentrifying neighborhoods, says Zlatan Sadikovic, a Bosnia-born transplant whose coffee shop and art gallery, Oloman Cafe, caters to that clientele.

The area’s auto industry roots run deep. Brothers John and Horace Dodge started building cars in a gargantuan factory in Hamtramck in 1914. By 1920 the city’s population had soared from a few thousand to almost 50,000 as workers, many of them Polish, clamored for jobs. More than 20 factories sprouted; some of their abandoned hulks still stand. After Chrysler Corp. bought Dodge Brothers Co. in 1928, the plant known as Dodge Main survived until 1980. Its demise cost Hamtramck a quarter of its tax revenue – “the closest the city ever came to truly being bankrupt,” says Greg Kowalski, a lifelong resident and executive director of the Hamtramck Historical Museum.
There was an obstacle: Thousands of people lived and worked and shopped and worshiped on the proposed terrain. Many had been residents for decades. Some resisted leaving; Ralph Nader and the Black Panthers joined their cause. With the help of a state supreme court ruling, Young invoked eminent domain to force the recalcitrants out. Just after noon on Feb. 4, 1985, Poletown’s first car, a Cadillac Eldorado, rolled off the assembly line. Only about 3,000 workers were needed initially because of all the automation. GM CEO Roger Smith hailed Poletown as “the most modern auto plant in the world,” with miles of conveyors, buried electrical wire, and automated vehicles ferrying parts around.

By 2014, Barra had replaced Akerson, and the Volt wasn’t even selling 20,000 units annually. With gasoline prices relatively low, car buyers were gravitating away from sedans to SUVs and pickup trucks, neither of which were assembled at Poletown. In 2015, Orion was given production of the Chevy Bolt, an all-electric rival to the Volt. The year after that, GM significantly diversified its interests, investing $500 million in ride-hailing firm Lyft Inc. and acquiring driverless vehicle startup Cruise Automation for $1.5 billion.

Soon, GM announced it would cut a shift and 1,300 jobs at Poletown. When SoftBank, Honda Motor, and T. Rowe Price agreed last fall to invest $6.2 billion in Cruise and team with GM to develop driverless cars on the Bolt design platform, it signaled the end of the line for the Volt. GM was fully committed to the Bolt—a mainstay of its plant in Orion Township. 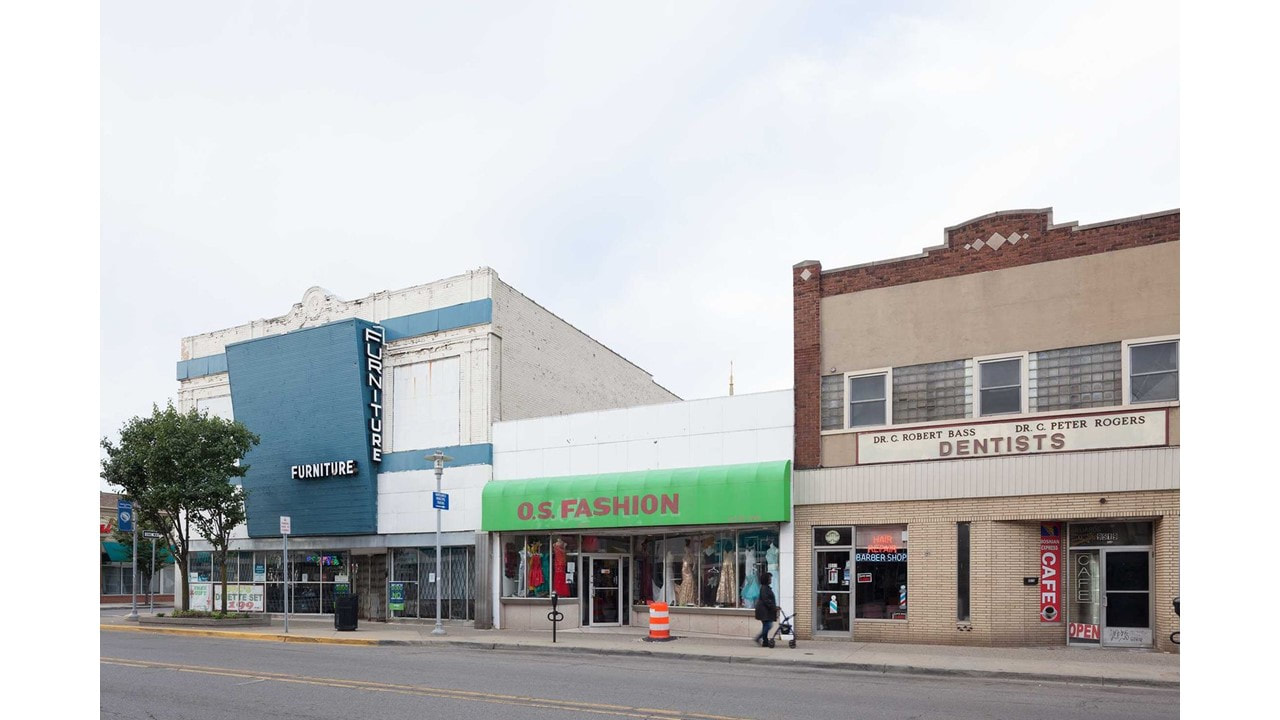 Traffic can be brutal on the 35-mile drive from Hamtramck to Orion Township. You head north on Interstate 75 into Oakland County, one of Michigan’s wealthiest counties, with a median household income of $73,369. You pass the U.S. headquarters of Fiat Chrysler Automobiles NV in Auburn Hills and then Bald Mountain (not really a mountain) as you enter Orion—pronounced, unlike the constellation, OR-ee-ahn.

Dozens of lakes, two country clubs, and lush swaths of parkland attract weekend visitors from all over southeastern Michigan. There are beaches, hiking trails, a campground, a “bark park” with a dock for dogs to launch into a pond, and a new “all-inclusive” baseball diamond designed for disabled players. To the north are Lake Orion, a 506-acre spread of islands and peninsulas ringed with houses that can command seven-figure prices, and the Village of Lake Orion, a quaint cluster of red-brick streets, restaurants, galleries, and condos.

The township’s population of 39,500 is 90% white, with a median household income of $91,820. In addition to the Orion GM plant, which currently employs a little more than 1,000, the township counts three other sizable companies that together employ about 800. Surrounding communities are home to multiple auto suppliers, engineering firms, and distribution centers.

The car industry first took notice of Orion in the early 20th century, when auto executives and their families would come by rail from Detroit to ride a wooden roller coaster called the Thriller and dance to live music on double-deck boats. Newspaper ads touted the lake area as the “Venice of the Middle West.” Members of Detroit’s bootlegging Purple Gang frequented it during Prohibition. Later on, Jimmy Hoffa, the Teamsters union boss, did, too, before famously disappearing in 1975.

GM opened Orion Assembly in 1983, two years before Poletown, and began producing an assortment of big sedans such as the Buick Electra and Oldsmobile 98. In 2009 the company threatened to shut Orion down as part of bankruptcy proceedings, but officials from the township and state rescued it with a tax incentive package. The company also struck a deal that year with the UAW to pay certain Orion workers performing nonassembly tasks a little more than half the top union wage of $30 an hour, a concession controversial enough that 200 members picketed UAW headquarters.

The wage savings and other cost-cutting measures led Orion to land the Chevy Sonic, the only subcompact assembled in the U.S., then and now. Such vehicles have thin profit margins—most are built in Mexico or other low-cost countries—so the Sonic hardly guaranteed Orion’s long-term survival. But it set up the plant nicely for Barra’s later commitment to smaller driverless and electric vehicles.

First came the Bolt, which went on sale in late 2016. Then early last year, GM said Orion would build Bolt-based test vehicles of the driverless Cruise AV. The union continued to agree to let GM pay workers performing specific nonassembly tasks as little as $15 an hour. (The UAW is pressing in contract negotiations for all plant workers to have a path to full-time, $30-an-hour jobs.)

Geography may also have played a part in GM’s nod to Orion. The township is a 45-minute drive from GM’s main tech center. Poletown is even closer to the tech hub, but its relative proximity to other GM assembly and engine plants made it easier for the company to transfer workers rather than give them costly severance packages. It’s already moved 616 Poletown workers to other facilities.

To many Poletown workers, who now take shifts on a picket line outside the plant’s gates, Orion’s future looks a lot brighter. “I’m hoping to transfer to Lake Orion,” says Jeff Hazard, who works at Poletown readying parts for sedans. Technically, GM hasn’t committed to closing Poletown, but the plant has been labeled “unallocated,” a legalism meaning it won’t have a car to produce after January. As part of UAW negotiations, GM has offered the possibility of Poletown building electric trucks and SUVs down the line. That’s little solace to workers who need a paycheck today. Melvin Johnson, who’s worked at Poletown for four years, says he’s headed to a perpetually busy plant in Arlington, Texas, that makes high-margin SUVs. “I’ll go where they’re working,” he says. “It’s a done deal.”

Hamtramck locals are bracing for the worst. In addition to potential tax losses, the city’s $18 million budget faces a $1.6 million revenue drop from the closing of a jail facility and the expiration of a federal grant. Kowalski says the town will manage. “Losing this plant is not going to destroy us,” he says. “We know how to do more with less than just about anybody.” Cafe owner Sadikovic says he can live without the plant but hopes GM does something constructive with it. “We don’t want this to be another eyesore for years,” he says.

Still, the memories can grate. In Suzy’s Bar, surrounded by Detroit sports paraphernalia and photos of Marilyn Monroe, bartender Jim Calsada remembers neighbors wielding shotguns in defiance of bulldozers when his family lost their home to the factory. “It was the beautifulest neighborhood,” he says. “I know the car business isn’t what it used to be, but it chaps my ass that the plant might be empty.”