power trip
the story of energy 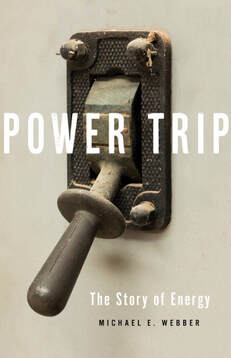 For thousands of years the story of energy was slow-moving and incremental, but in the last few hundred years in the developed world, the energy story has become more interesting. It's the developed world that demonstrated the benefits of increasing energy access and it's the developed world that is grappling with how to maintain those benefits while reducing the environmental consequences. Older examples of energy consumption are useful for context, but the crux of the decision at hand – how to expand energy access without scorching the earth – is more recent. Up until a few hundred years ago, water was the most important ingredient for civilization, but ever since the industrial revolution, which gave us the combination of advanced fuels and new machines, energy has joined water as one of the two most important ingredients of civilization. Prior to that, the history of energy is thinner – there's less to say about those centuries because our relationship with energy was fairly stable. That makes the industrial revolution a worthy boundary for a discussion of energy.

Just as we use carbon radioisotopes to date ancient organic materials and artifacts, we can use energy as a dating element for the modernity of various societies. The type of energy used and the technologies available are markers of time. Older, less developed societies used primitive solid fuels such as cow dung, wood, charcoal, or straw. Burning these fuels provided the energy needed to heat homes, cook food, and create household items by making lime, boiling soap, and so forth. The heat could also be used to forge and soften metals. Those primitive fuels also became products and building materials. For example, wood – a form of bioenergy, which is just energy from the sun stored in biomatter from years of photosynthesis – gives us firewood for heating; lumber for buildings, ships, and fences; and pulp for paper.

Older civilizations also used flowing water, wind, and animals to perform work and move people and goods. The classic European image of a windmill or medieval water wheel that powered a mill to grind grain, saw wood, or polish glass is a cliché indicating an older society.

As time went on, the fuels became higher-performing. Whale oil was a popular illuminant that displaced dirtier, dimmer candles and torches. Despite that, whale oil was eventually displaced by kerosene for indoor lighting, which was cheaper and brighter and didn't smell pungent like burning blubber. Coal, which has even higher energy density, burns hotter, and produces less smoke than wood or cow dung, became a preferred fuel for indoor heating and industry. That means oil saved the whales and coal saved the forests. Coal's higher combustion temperatures were a natural fit for metalworking, which meant that the rise of coal enabled the rise of steel that enabled the development of better tools. In a virtuous cycle, the importance of coal kick-started a mining boom in England that led to deeper and deeper mines. As those mines filled with water, the need for a pump became acute. The steam engine – powered by burning coal – was invented by Thomas Newcomen and later improved by James Watt, who were motivated by the need to pump the water out of the mines. Solving the water problem enabled even greater coal production. 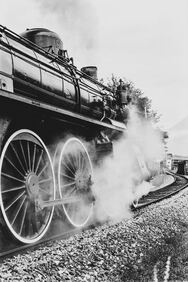 That same steam engine also allowed, for the first time in history, the conversion of heat into motion. Heat is easy to produce by the simple act of burning fuels. But motion always depended on water power (such as that from flowing streams), wind power (for sailboats or windmills), or muscle power (from walking under our own strength or from animals). But with the steam engine, burning a fuel could give the energy needed to boil water to create steam that would drive pistons to create motion. This breakthrough eventually led to the creation of a self-reinforcing loop of energy and innovation, as ironclad steam trains powered by coal from their hoppers and riding on steel rails forged in smelters that used coal could transport coal dug with modern tools from faraway mines.

​The steam engine, miraculous as it was for its day, would eventually be supplanted by the internal combustion engine. While bulky steam engines powered by coal were a good fit for heavy vehicles like mining equipment, ships, and trains, they were awkwardly sized for vehicles at the scale of an individual or a family. Gasoline-powered engines – much lighter and more powerful than their steam-powered cousins – were a good fit for transportation, enabling a revolution of personal mobility. The impact of individualized, motorized transportation is hard to fathom. In total, it created some of the world's largest industries: automotive manufacturing (using steel made from coal and tires made from petroleum at factories operating on electricity), oil production for automotive fuels, and road construction (using asphalt from petroleum and cement made with coal). These breakthroughs changed where and how we lived, as transportation encouraged far-flung yet interconnected societies and electricity enabled urban living that reached to the sky.
Whether we realize it or not, the forms of energy and their related technologies mark the passage of time. If moviemakers or artists want to visually depict antiquity or medieval times, then they will show someone lifting water from a well by hand, riding a horse, or burning wood. To show the industrial revolution of the late 1800s, they will show factories, trains, and ships burning coal with black smoke curling from the chimneys. To show the twentieth century, gasoline-powered cars and electric appliances paint the image.

Energy innovation is also used as a timestamp that defines our eras. Energy conversion systems like the steam engine created the industrial revolution, the turbine engine enabled the jet age, and the electrical transistor enabled the information age. That these human eras are marked by energy advances makes perfect sense because energy drives individual metabolisms in living creatures and the urban metabolism of modern civilizations.
Energy is more than just fancy tools and cozy comforts of life: democratization of energy access reduces economic inequity. Countries where citizens have access to energy are freer. Looking at the earth at night, speckled with lights from cities, shows where people have access to electricity. The darkness of North Korea despite its proximity to brightly lit South Korea reveals that autocracy and energy poverty are different expressions of the same idea. Energy is freedom because it means people can move from one place to another and because lighting is available so students can study at night. Getting an education is the best pathway to economic opportunity. It also enables citizens to get information that improves the functioning of a democracy or resistance to autocracy.

Critically, energy can be used to improve water supplies. Once energy and water were available in abundance, food could be grown on a large scale, achieving higher yields per acre of farmland despite a drop in the number of agricultural laborers. As food productivity went up, workers could specialize in other pursuits. That specialization, combined with the availability of energy, also made it easier for many people to accumulate wealth. Energy was used for running factories, including the machines themselves and the devices such as lighting and air conditioning that made indoor settings comfortable and productive. In addition, the advent of electric lighting reduced the cost and improved the brightness of home illumination, which made it easier for students to do their lessons, just as students could stay in school longer because they weren't as necessary on the farm.

Because agriculture was now able to feed an entire nation with a small fraction of the population – thanks to energy – the allure of rural living was offset by the limited economic opportunities there as agriculture advanced its technological capabilities. Consequently, many people – especially youth – moved to cities to look for jobs and to use their newfound wealth and freedoms for the entertainment and cultural activities available in urban areas. The additional spare time that energy bought could be spent on cultural or frivolous delights such as listening to the opera or watching movies, improving quality of life.

Living in cities required modern transportation to bring food, goods, and people back and forth. Personal mobility was the perfect companion to social mobility, bringing the freedom of movement to a rising number of people. It allowed city workers to live in the suburbs or to take plane or boat trips for work or vacation. These transportation systems include coal-fired trains, gasoline-powered cars, and spaceships propelled by rocket fuels.

Energy is also intermingled with personal, urban, and national security. Through public lighting, energy brought safety to dark cities by illuminating the shadows where serial killers and other predators hid. It enabled weapons of war – nuclear bombs and the planes that dropped them. Energy is also a cause of war, a target of war, and a strategic driver of a war's key decisions. The intermingling of energy security and national security, a driving part of national defense strategy in the first part of the twenty-first century after the terrorist attacks of September 11, 2001, highlighted the connections between Western oil consumption and threats to our well-being. As energy became the central enabling feature of modern civilizations, it also became its greatest security vulnerability.

Bringing these pieces together, it is clear that the story of energy is the story of civilization.
Michael E. Webber is the deputy director of the Energy Institute, the Josey Centennial Professor in Energy Resources, and professor of mechanical engineering at the University of Texas, Austin. He is also the host of the upcoming PBS Documentary Series, Power Trip, and the author of Thirst for Power. He lives in Austin, Texas.