by Daniel B. Poneman 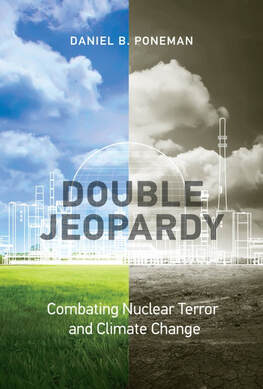 Today we face two existential threats: nuclear annihilation and catastrophic climate change. Both stem from human origins. We need to fight both threats aggressively. But even if every nation fulfilled 100 percent of its existing national commitments to curtail greenhouse gas emissions, a heroic yet utterly unrealistic assumption, the world would fall far short of the cuts needed to limit the projected rise in global average temperatures to less than 2 degrees Celsius above pre-Industrial Revolution levels.

Given this sobering reality, increased use of carbon-free nuclear energy is indispensable to safeguarding our planet and our way of life. But can we preserve or even expand its environmental benefits without increasing the risks of nuclear terrorism?

Yes, and we can do so with rare bipartisan agreement if two conditions are met.

First, Americans who care about climate change or the quality of the air that we breathe need to recognize and accept the pivotal role that nuclear energy can play in addressing those concerns. This will not be hard for the 65 percent of Americans who support nuclear energy as a part of the U.S. energy mix. But it will be extremely challenging for many American environmentalists who retain a deep aversion to nuclear power out of concern about safety, security, or environmental implications. Just as climate-change skeptics should embrace a tax on CO2 emissions as a hedge against the risk that they are wrong, so too should those who argue that renewables and efficiency measures will suffice to decarbonize our energy environment support nuclear energy as a hedge.

Second, policymakers who care about either the risks or the benefits inherent in atomic fission need to support a coherent U.S. nuclear strategy. Those who care about the safety and security of the hundreds of reactors already operating around the world, with scores more under construction, should want U.S. safety and security standards to be sustained. The best way to keep all nations operating at the highest possible standards is a vigorous peer-review process among all nations in the field, including the United States, which has been a global leader on nuclear safety and security since the dawn of the atomic age. Those who care about U.S. advanced manufacturing, and the jobs and the exports that go with it, should invest in advanced nuclear technologies and roll up their sleeves to negotiate a viable path to address the growing accumulation of nuclear waste in the United States, which is often called a solvable problem but never seems to get solved.

If the United States wishes to remain a global leader in nuclear energy, then it must abandon the misnamed and misbegotten “gold standard” as a condition on U.S. nuclear exports, rather than driving every possible purchaser of U.S.-designed nuclear power plants into the arms of foreign competitors. It’s not gold, it’s not standard, and it is killing the U.S. ability to compete in the global nuclear marketplace. Given what could be the century-long life span of a nuclear project, from negotiation and planning, through construction and fueling, to operation and eventual retirement of a reactor, each project that the United States loses to its competitors denies the nation a century of engagement with other countries whose cooperation could bring untold political, economic, and security benefits to our citizens.
We will not solve these urgent problems unless all stakeholders in government, industry, and civil society engage in a serious discussion and find ways to encourage actions across a broad spectrum. The most effective steps will be those that can engender widespread support while aligning virtuous outcomes with actions that can be driven by self-interest.

The challenges are formidable, but not insurmountable. It is clear what we need to do to save humanity and the planet. We must make vigorous efforts to reduce greenhouse gas–emissions across industries, across boundaries, across oceans, and across generations. We must also take vigorous action to reduce nuclear threats across the same dimensions. A coherent American energy policy can make an indispensable contribution to the efforts to combat both the threat of nuclear annihilation and the threat of catastrophic climate change, while promoting the prosperity and well-being of people in the United States and around the world. Given the stakes, there is no time for delay.
Daniel Poneman is a Senior Fellow with the Belfer Center at the Harvard Kennedy School and the President and Chief Executive Officer of Centrus Energy Corp., which provides enrichment, fuel, and fuel services to utilities that operate nuclear reactors throughout the world. Poneman previously served as Deputy Secretary of the U.S. Department of Energy, as Acting Secretary of Energy, and on the National Security Council staff. He is the coauthor of Going Critical: The First North Korean Nuclear Crisis.