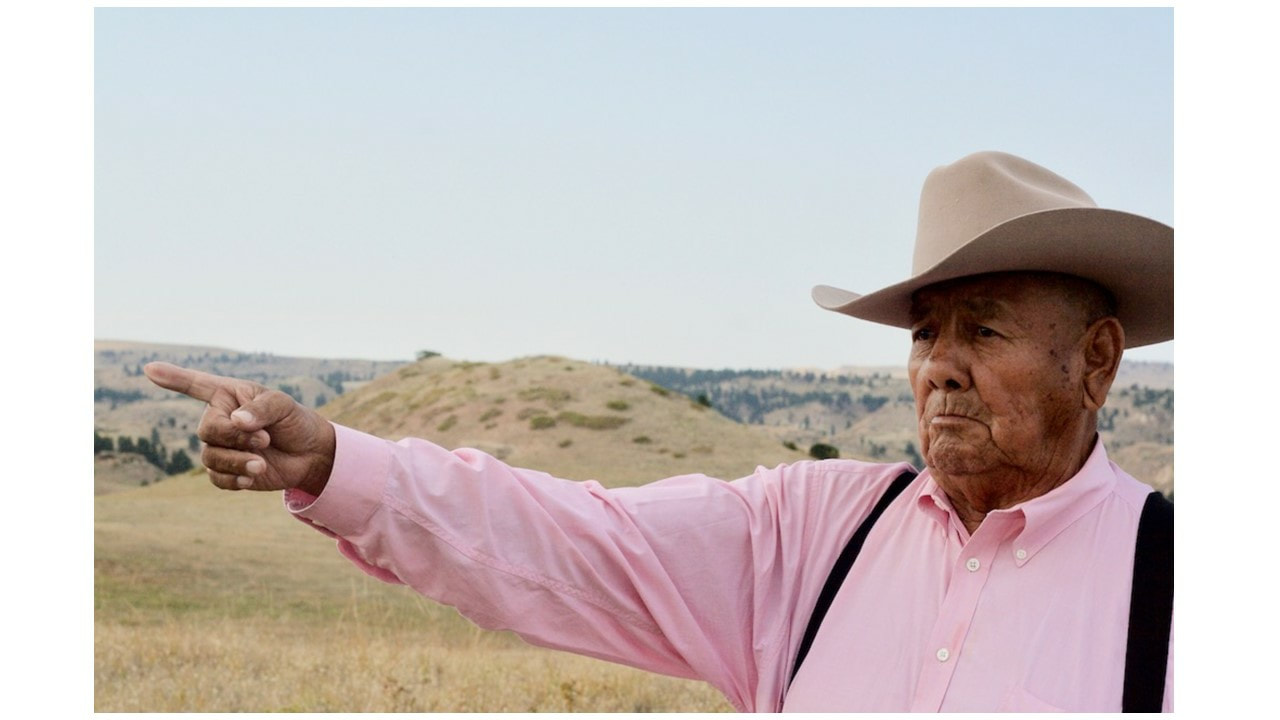 Wayne Moccasin points to the land that Cloud Peak is trying to buy,
​even if it means using the US Bureau of Indian Affairs to force eminent domain.
Introduction

Wayne Moccasin drove his white Ford Explorer up one hill after another in search of the most panoramic view of his family’s 2,000 acres on the Crow Indian Reservation, which runs parallel along the Wyoming-Montana line. The sun was sinking behind the Bighorn mountains through a smoky sky. Sagebrush crunched under the tires each time he turned off the bad two-track to try another hill. It’s rough country. It’s also got some powerful coal beneath it, a fact that’s made the Moccasins persons of interest to coal companies for more than 40 years. Wayne remembers dealing with four different energy companies over the decades, beginning with Shell Oil in 1973 during the OPEC oil embargo crisis.

The Moccasins are fully enrolled members of the Crow Tribe. The land is owned by nine siblings, each with an equal share, but managed as part of the Crow Indian Reservation and held in trust by the Bureau of Indian Affairs, which supervises and approves any lease. Gillette-based Cloud Peak Energy is the latest would-be miner to come calling. In recent months, leasing negotiations have turned bitter. After years of offers and counteroffers, five of nine Moccasin siblings are still holding out for a better deal. The coal company argues that they’re being unreasonable and holding up a project that stands to benefit the entire Crow Tribe.

In May, the Bureau of Indian Affairs upped the ante on the Moccasins. Exercising the trust will give the federal government control of the land. The BIA informed the Moccasin’s they had three months to reach an agreement before the agency inks a deal on their behalf. The Moccasins aren’t opposed to coal mining, they say. They just want a good deal before giving up control of their inheritance. In many ways the years-long back-and-forth is a classic Western land and resource squabble. It includes fundamental questions about fairness, the appropriate role of the federal government, the impact of institutional discrimination and corporate vs. individual rights. 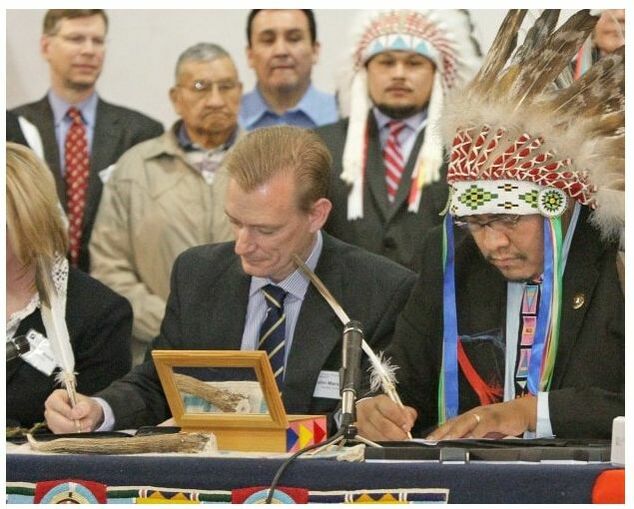 Shell Oil never did mine on the Crow Reservation, but Wayne found the company’s representatives to be professional and enjoyable to negotiate with, he said. He doesn’t feel the same about Cloud Peak Energy. “They’re too…” Wayne began before trailing off. “They want to beat us,” he said. Wayne, four of his siblings, and their lawyers from the Sheridan law firm Davis & Cannon, accuse Cloud Peak using extra-legal strategies to force the Moccasins accept unfair terms.

Coal mining revenue is critical to the Crow Tribe, which owns the mineral rights to all coal on the reservation but is economically isolated and has few other revenue sources. In late May, acting BIA superintendent for the Crow Indian Reservation Michael Addy sent letters informing the nine Moccasins that unless the dissenting siblings reach a deal with Cloud Peak Energy within three months, “the BIA will make a ‘best interest’ determination on behalf of the non-consenting owners.” At that time, five Moccasins had agreed to Cloud Peak Energy’s terms, a majority. But in June the majority shifted when Lana Moccasin revoked her agreement. Cloud Peak Energy is refusing to recognize that reversal.

Cloud Peak Energy’s latest offer to the Crow Tribe comes to $4.7 million in combined signing bonuses and leasing rates — more than $500,000 per sibling for use of their land for 50 years. But the dissenting Moccasin siblings, Wayne in particular, point out that the company is only offering coal leasing rates for the first 25 years. Cloud Peak would pay lower grazing lease prices for the second 25. Cloud Peak Energy representatives maintain they’ve negotiated with the Moccasins in good faith and are key economic partners to the Crow Tribe. The company has paid the tribe almost $13 million in lease options and leasing bonus payments and created educational scholarships, says a company spokesperson. “We have been working in good faith with the Moccasin family for over five years and have reached an agreement with many of the family members,” Cloud Peak Energy spokesman Rick Curtsinger wrote in an email. He accused lawyers of fostering dissent in the family. “Unfortunately, divisions within the family, exacerbated by a long line of attorneys representing some of the family members, stand in the way of a project critical to the economic well-being of the entire Crow Tribe,” Curtsinger wrote. “We have made countless offers over five years with the goal of ensuring that all members of the Crow Tribe can benefit from their coal resources and continue to engage with the family to that end.” Curtsinger declined to respond specifically to allegations that the company was manipulating the BIA to apply pressure on the Moccasins.


A tale of two families and a rich coal seam

Beneath the Moccasins’ grazing land is “high-quality, low-sulfur” coal, according to Cloud Peak Energy. It will burn cleaner and with more electron punch than the Powder River Basin coal nearby. The coal would be easy to mine, too. “I heard the overburden is only about 20-30 feet deep and you’ve got the coal seam.” And there’s a lot to that seam. “Once they get going from there they’ll go for 50 years maybe,” Wayne Moccasin said.

Complicating the issue even more, the coal seam under Crow Tribe land extends into Wyoming and Montana. In Wyoming it’s difficult, though not impossible, to force a surface owner to consent to a mining lease, even if they don’t like the terms. On the other hand, Montana law prohibits the state from exercising eminent domain for coal mining; federally-owned coal can’t be leased to mining companies without the consent of those who own the surface above it. Such has been the case since the Surface Mining Control and Reclamation Act of 1977. “They can come in and buy you out,” said Shannon Anderson, an attorney with the Powder River Basin Resource Council who often represents landowners in disputes with energy companies in Montana. “But if you don’t want to be bought out you don’t have to be.”
And then there are separate rules for Indian reservation that are even more complex.


BIA consent — necessary for development, or open to exploitation?

The authority of the BIA to order ‘consent’ on behalf of tribal owners can cause intense conflict.  But the federal government argues that the power of eminent domain is necessary in the context of Native American history.  As families have grown and moved and married over the centuries, the ownership interests of an allotment can become more and more fractured, making it at times impossible to find all the interest holders and seek their consent. It’s not unusual for the BIA to make a decision on behalf of industry – fractional ownership can paralyze economic development, even when it is in the best interest of a tribe. The law allows the BIA to consent on behalf of interest holders who can’t be located or are legally disabled or incapacitated. But it also allows the agency to consent for individual landowners in a fractioned allotment, provided the agency gives notice of its intent to consent on their behalf and gives them a three-month period to reach agreement on their own. Obviously, that gives companies a lot of leverage over landowners.

Regulations establish a percentage for how many individual family members and landowners have to agree for consent to move forward. The letter from the BIA to the Moccasin siblings said that eight of the nine siblings had to reach an agreement with the coal company to stave off its forced consent. Though a majority of the Moccasin family agreed to the deal, that majority shifted when one withdrew their consent – and yet, the final vote was never close to the required ‘eight of nine’ vote.

Should the new majority opinion affect the BIA’s final decision, or does the federal government have the power to ignore the will of the family members regardless of their opinion?  Clearly, this issue is headed for the US Supreme Court where precedent continues to evolve.

The original story was published by WyoFile, an independent nonprofit news organization focused on Wyoming people, places and policy.