Many scientists, doctors and inventors were fascinated by how X-rays made the invisible observable. But Marie Curie suspected there was more to discover.
​
by Stephen Mansell 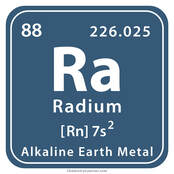 She reached this conclusion on the back of a curious observation. In testing countless rocks and minerals for radiation emissions, using measuring equipment invented by her husband Pierre and his brother Jacques, she noticed that uranium ores gave off greater emissions than pure samples of uranium. Soon Pierre, a professor of physics at the university, set aside his own research to help her explain why.

In July of 1898, they showed that the ore contained a new element that was giving off similar radiation. They named it polonium after Marie’s home country, coining the term “radioactivity” in the process. Yet it became apparent to the Curies that there was another substance in the ores that was considerably more radioactive than either uranium or polonium. The challenge now was to find out what.

Enter Radium
The discovery of radium was hard work. Corrosive acids, strong alkalis and hard labour were required as the Curies performed many separations to tease away the tiny quantities of radium from the 30 or so other elements present. They were working with an ore called pitchblende which they had sourced from a mine in the Ore Mountains that separate Germany from the Czech Republic, in what was still part of the Austrian empire.
​
The university had only given them a shed next to the departments of chemistry and physics for their work. This was the cold and damp environment in which they had to grind, crush, dissolve, precipitate, filter, wash and painstakingly measure what they found. By December 21 of that year, they had made the discovery. On Boxing Day, it was published in a paper read to the French Academy of Sciences:
The new radioactive substance certainly includes a very large portion of barium; in spite of that, the radioactivity is considerable. The radioactivity of radium then must be enormous.
This substance is the most radioactive natural element, a million times more so than uranium. It is so radioactive that it gives off a pale blue glow. Yet it would still take the Curies another three years to produce a pure radium salt. Having originally worked with 100g of the ore, equivalent to a tenth of a bag of sugar, they would need a tonne of ore to isolate just a tenth of a gram of radium dichloride. They received the Nobel Prize in Physics in 1903 for this work, sharing it with Becquerel.

Pierre was tragically killed in a coach accident in 1906 (he was also deeply unwell from the effects of his work with radiation). Marie Curie took his professorship and continued with their research, later isolating pure radium metal and receiving the Nobel Prize in Chemistry in 1911.

The boom and bust of radium over the first three decades of the 20th century remains one of the great cautionary tales of our times. Among a slew of papers that the Curies published in the years after its discovery, one showed that radium could treat cancer by killing cancer cells more quickly than healthy cells. It became used as one of the first radiation treatments for cancer and other skin diseases.

Yet the metal’s strange blue glow convinced some that it had other benefits. It became widely used in quack treatments and elixirs, from therapeutic waters to soap to chocolate bars, where the buyer was only safe if the mixtures contained no radium at all.

Among other uses, entrepreneurs used radium to create “glow-in-the-dark” paint. This led to the tragedy of the radium dial painters in New Jersey – an all too familiar story of the promise of profit over safety, and denial of the facts. Factory workers, mostly young girls seeking an independent income, ingested the metal while applying the paint to watch faces. The radium bound to their bones like its chemical cousin, calcium, injuring, disfiguring and killing many of the two thousand workers estimated to have been employed at peak.

The radium industry dramatically declined after health concerns began emerging in the mid-1920s. It still has a lingering presence in the contaminated soils and land around the old extraction and industry buildings in Denver, Pittsburgh and New Jersey. The UK is still dealing with the legacy of radium-painted dials used in World War II, with Dalgety Bay in Fife just one area affected by radium displaced from old waste dumps. When once the challenge was to extract this buried treasure, now the focus is on safely treating it as buried waste.

Marie Curie made it her lifelong goal to work out what radioactivity was, what produced it and what it could mean for the nature of matter. This almost certainly contributed to her death from leukaemia at the age of 66, though she remains the only scientist to have received Nobel Prizes in both physics and chemistry. She became a landmark figure for women in science, and the element curium was later named in her honour.
​
Today radium is barely used in medicine, apart from treating some specific bone cancers. It was too expensive and rare to be a widespread feedstock for radiation therapy, and was replaced by alternatives like radon gas and later an isotope of cobalt. Yet radiation therapy and the knowledge about radioactivity that came with discovering radium remain hugely important. The story of radium mirrors that of radiation itself – a double-edged sword, with great benefits that always need to be balanced against the potential for massive harm.
​
By Stephen Mansell, Assistant Professor, Chemistry, Heriot-Watt University
This article originally appeared in The Conversation.